One of the drawbacks of Ian’s plan to study in the U.S. was that he couldn’t afford to return home to London for Christmas. Fortunately, his advisor invited him to spend the holiday with her family. When he arrived on Christmas Eve, he was pleased to see that, in addition to his professor and her husband, her striking niece from L.A. was joining them.

Brittany was blonde, tanned, and gorgeous. Her radiant blue eyes were outdone only by her warm personality. Ian was enchanted by everything about her. Never having been to California—and suffering in the sub-zero Chicago cold—he couldn’t get enough of her stories about a place where bikinis, waves, and surfboards ruled.

The evening was wonderful. Eggnog. Dinner. Wine. Carol singing. Brandy. A roaring fire. More wine. Full of good cheer—and feeling the effects of having too much to drink—everyone hugged warmly and went to bed.

Just as Ian was about to turn off the light, however, there was a knock on his door.

“I’m sorry to bother you.” Brittany sheepishly poked her head around the door. “The window in my room is open a crack and I can’t close it. Will you help me?”

As they wrestled with the window, the lock broke and more frigid air rushed in. It was clearly too late to wake up their hosts and do repairs. “Don’t worry,” he said, “Take my room. I’ll sleep on the couch downstairs.”

“I appreciate the gesture, but this is a drafty old house. You’ll freeze. We’re both adults and I trust you,” she smiled. “There’s no reason we can’t sleep in the same bed. You just better not snore,” she joked.

Back in Ian’s room, the young man couldn’t stop from laughing when Brittany removed her robe. She had on a red union suit—complete with feet and a drop-seat. She turned beet red. “Laugh if you want, but visiting the Windy City is like returning to the Ice Age for me.” She jumped into bed, pulled the covers over her head, and muffled ‘good night.’

Drinking too much had an odd effect on Ian. He’d sleep so well, it was like he passed out. He slept so deeply, he could barely remember any dreams he had.

Tonight, he had two. In the first, he and his bedmate were spooning. It felt so natural, he reached around to put his hand on her waist. But instead of flannel, he landed on her soft, warm stomach. The bottom button of her pajamas was unfastened. Curious and hopeful, his hand inched up. He discovered all the buttons were undone, and the front of her garment was completely open. Unable to resist, he cupped one of her breasts. He gently massaged it, then the other. She sighed. As he continued, her breathing deepened. His cock stiffened and poked through the opening of his pajama pants. She adjusted her body slightly, and his shaft settled against her moist lips. Her drop seat had also somehow come undone! To his delight, he felt her hand on his cock. She positioned its head against her opening, and he instinctively entered her. There was no sense of urgency or need for passionate release. They moved only enough to keep him hard and buried deep inside her warm, wet pussy. He was in heaven. Sadly, the dream faded.

Later, he had another. In this one, he was lying on his back, completely naked, and rock hard. A passionate, nude Brittany mounted him. Coating his cock with her juices, she enthusiastically slid up and down on it. When she let out a deep groan, her pussy spasmed around his shift, and he came as well. As she lay on top of him, he sank into darkness again.

As daylight streamed into the room, he put his pillow over his face with a painful moan.

He moved the pillow just enough to uncover his mouth. “I shouldn’t have had so much to drink.”

“I guess so. I think I had a couple of dreams, but I don’t remember anything. Couldn’t have been very interesting.”

When the pillow was yanked from his face, he was forced to open his eyes. Brittany was sitting against the headboard wearing only a naughty smirk. Looking down, he realized he was naked as well.

“It was a better way to stay warm than that onsie,” she laughed. “But if you can’t remember what happened and thought those were dreams, I’m insulted,” she pretended to be mad. “So if you don’t want to hurt my feelings,” she slid towards him seductively, “you’ll let me give you a Christmas present you’ll never forget!” 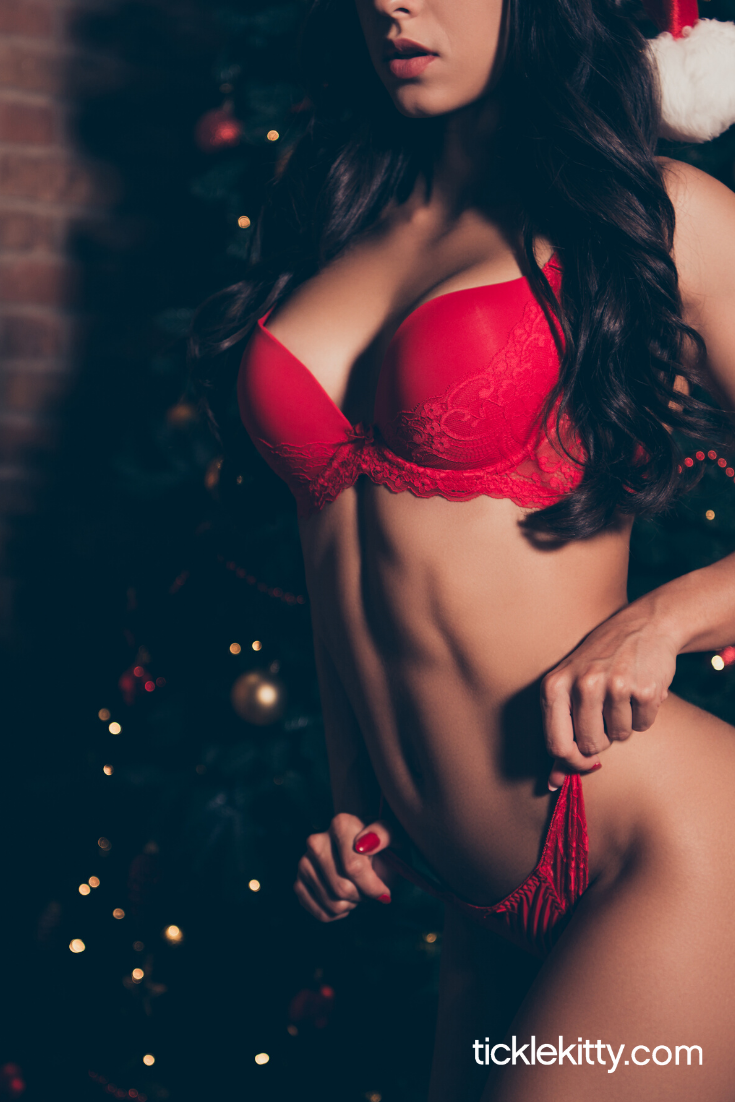