1. Most women have used sex to manipulate a man. A whopping 84% of women reported having used sex as a tool to get a guy to do something. Luckily, we don’t mind, ladies!

3. Men spend time thinking about sex, while women are out doing it. Guys think about sex 9.2 times a day, but only engage in the real thing 8.3 times per month. Women, on the other hand, have sex three times a week, while only thinking about it 5.6 times per day.

4. Adolescents are having less sex. Data from the Youth Risk Behavior Surveillance System found that 59% of high school students are still virgins. That’s a 13% decline since 1991. Way to go!

5. Four-year educations are linked to having more partners. On average, those with bachelor’s degrees have three more sex partners during their lives than those with other degrees. They’re also three-times more likely to desire a polyamorous lifestyle. So stay in school, but not for too long!

6. Nearly 70% are turned on by the idea of having sex in public. On a list of “kinky” acts people have tried, or would like to try, is public sex at 69.4%. But males mostly account for this thrill of the danger of getting caught. Women are more into bondage. Spanking ultimately tops the aforementioned list.

7. Committed couples have better sex. Guys and gals in relationships are three-times more likely to have a satisfying sex life than those who are single and/or engaging only in casual sex. There’s something to be said for partners who’ve taken a little time to get to know one another.

8. Most of us think about having sex with a different partner. While 73% of us in relationships fantasize about people other than our partners, only 22% of us feel guilty about it.

9. Men dig receiving nude selfies. At 67%, no big shock there, but what guys need to stop assuming is that 80% of women want to see their naked bits. They probably don’t. So unless you’re asked to, don’t do it!

10. Alcohol really is a social lubricant. When asked about drug use during sex, 96.1% reported having used alcohol during encounters. Marijuana came in second at just over 80%. Meth, crack, bath salts and heroin couldn’t even approach 10%.

11. The average duration of sexual intercourse is 7.3 minutes. Relax, it’s not just you. And those guys, like me, who brag that they can go for hours are either lying or doing it all wrong. If it takes hours to get it done for both partners, sex can verge on becoming a burden, not a joy. Foreplay is where it’s at, man, and averages 20 minutes per encounter.

Get crazy with sexy sex toys from TickleKitty.com: 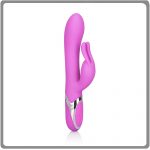 Not your average rabbit vibe. A tip that twirls, a shaft with rotating beads, and long clit ticklers for the perfect triple-stimulation experience … BUY NOW